Sleep when you can 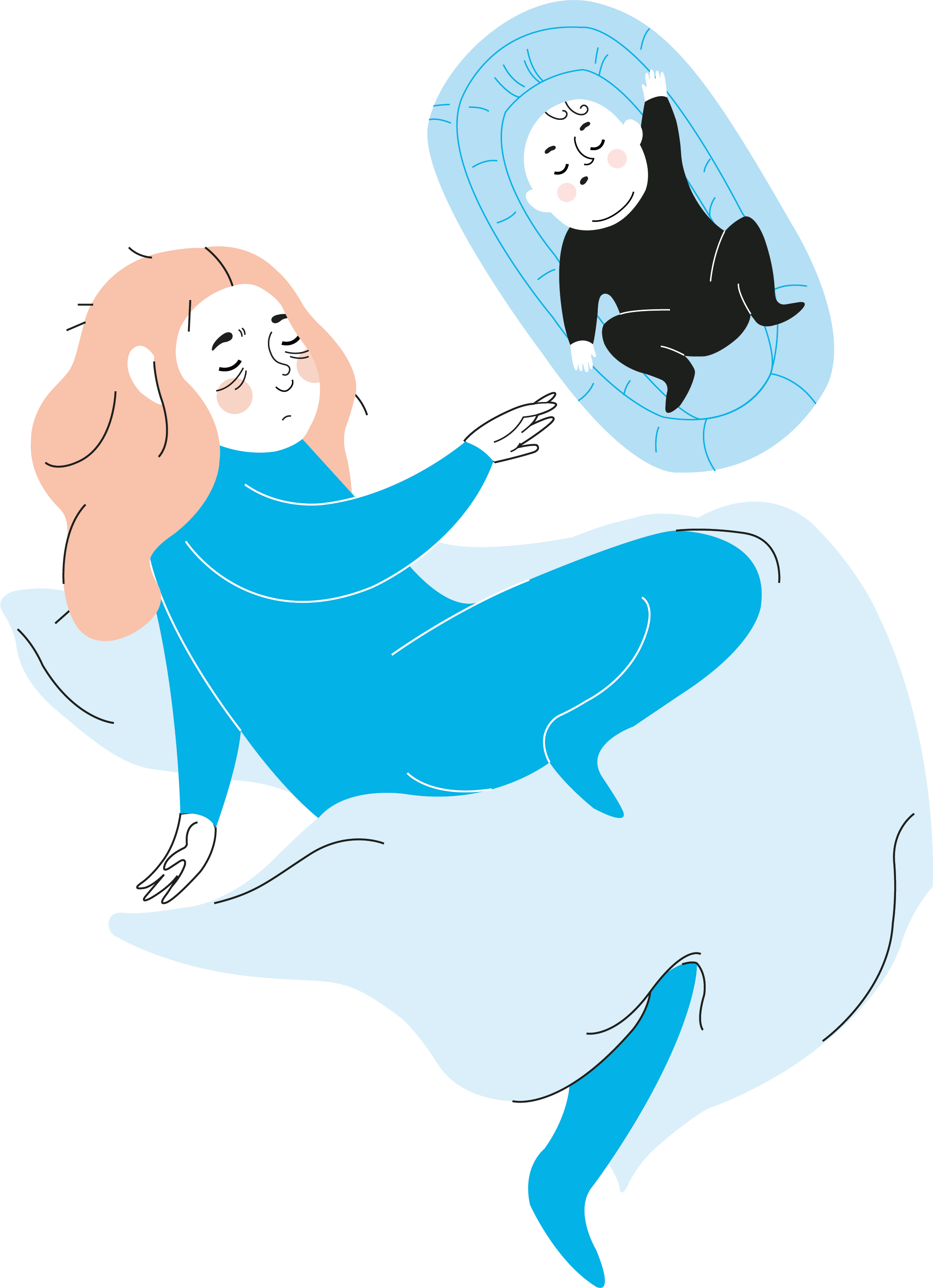 Sleeping well is important for the infant’s development and your ability to care for it. You get less sleep with a baby in the house. Rest when it’s asleep, and ensure you get a respite when it’s needed.

Create a division between day and night – that can contribute to good sleep quality. Activity and natural light during the day will improve the quality of your sleep at night. By all means use the “comfort stair” and the film on Comforting which you can find in the app. 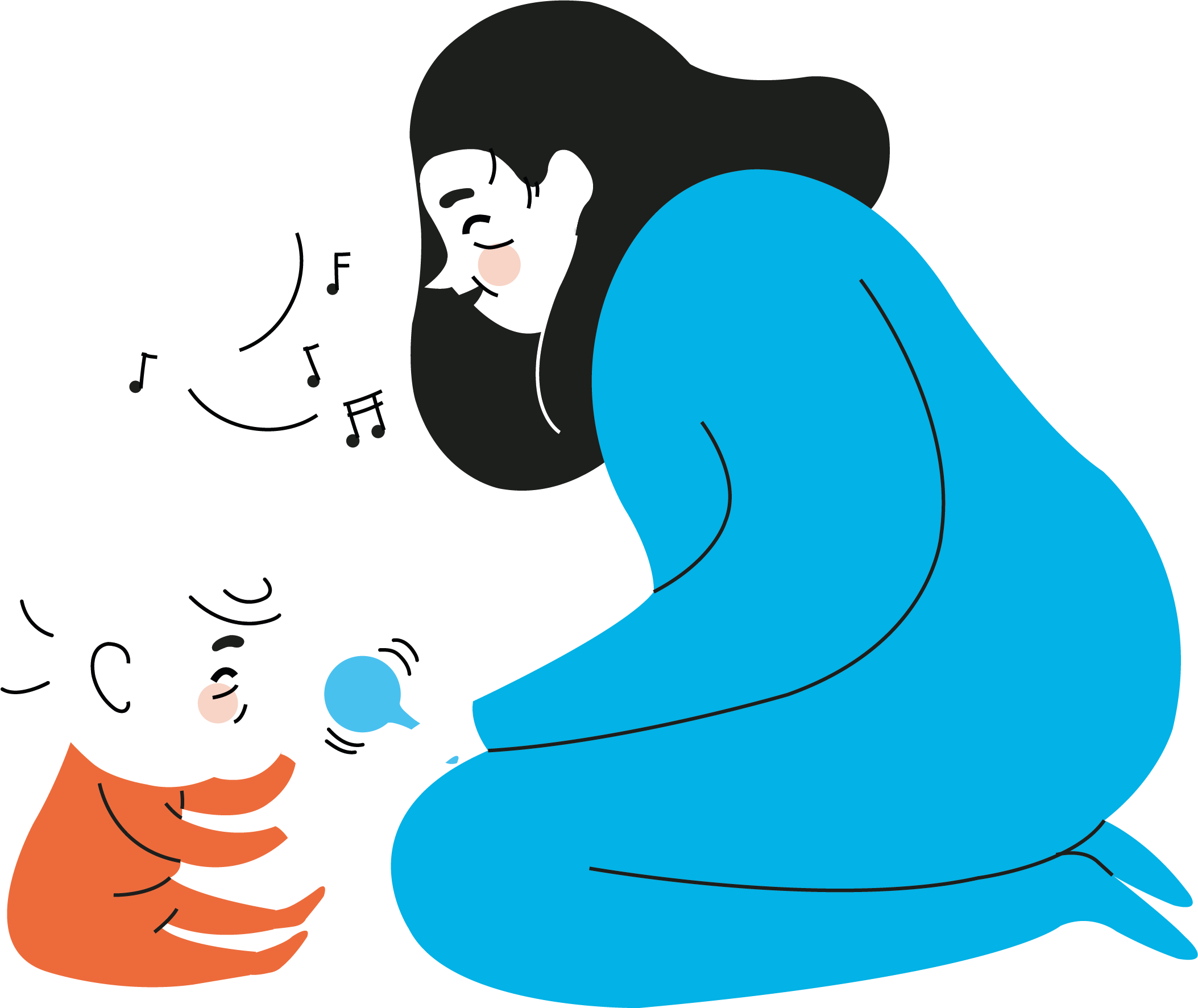 Sleep is essential if we’re to function well. When we sleep badly, we become more short-tempered and our ability to get things done weakens. It’ll also affect our memory. We’re better able to tackle emotional challenges if we have slept well. Little or disturbed sleep can make you more irritable and less available emotionally. Sleeping well will strengthen your ability to provide care. Having an infant at home can often reduce your sleep and undermine its quality. So it’s important to make provision for getting the best sleep you can. Sleeping as well as possible is also important for infants. Good sleep in their early years often leads to sleeping well in later life. That makes this important for the child’s development. And parent-child interaction is strengthened if both get enough sleep.

The youngest infants often sleep 13-17 hours per day. A three-month-old baby sleeps continuously for about 3.5 hours, which has generally extended to roughly six hours when they reach six months. An infant normally sleeps two-three times at six months, and twice a day between nine and 12 months. See a complete overview here (in Norwegian only).

The youngest often sleep for 60 minutes at a time – often fairly lightly to begin with, then a little more deeply, and finally lighter again. Parents may often think the baby has woken up at this stage, but it will usually fall back into sleep again if left undisturbed. So you should give your child a chance to enter the next sleep cycle. Light sleep dominates during the first months of a baby’s life. That means its body can be active even though it’s sleeping well. It can sometimes make odd grimaces or small sounds, suddenly throw out its arms or make eye movements you can see even though their eyes are closed. This is a little strange, of course, and it can sometimes be hard to know whether the child is sleeping or not. It’s easy to imagine that grimaces and other movements are a sign of hunger, pain, anxiety or quite simply a need for comfort and closeness. Some parents therefore start talking to, touching or picking up the baby, so that it wakes up. When infants are sleeping deeply, their bodies show little activity and they make few grimaces. Some parents can become a little anxious because you can hardly see or hear the baby’s breathing when it’s sleeping deeply. So it could make sense to get to know the various sleep phases in order to avoid disturbing the baby when it’s sleeping – lightly or deeply.

If you have any questions about your child’s sleeping patterns, raise them with your doctor, midwife or health visitor, or talk with someone else at the health clinic.

Sleeplessness is normal in infants, and we estimate that around 25 per cent of them have chronic difficulties with falling or staying asleep. To prevent this at an early stage, it’s important to establish routines which prevent a baby developing sleep problems. If you encourage your child to be active during the day, they’ll sleep more and better at night. Infants under the age of three will also normally need to sleep during the day. Here are some tips on good sleep routines for the very youngest children:

An infant is entirely dependent on adults for protection. The caregiver role becomes even more demanding if you’re not properly rested. The more rested you are, the greater your chance of tackling the demands you face with a little baby at home.

Not getting enough sleep isn’t good for you. One result could be that you find it more difficult to control your own feelings. Your concentration declines when you’re tired and worn down. Failing to sleep when you can may have serious consequence – when you’ve got yourself a little baby.

If you’ve had too little sleep, then catch up when you can – including during the day (preferably as early as possible). Organise things so that you can sleep when the baby’s asleep, for example. Then you’ll be more rested when the baby’s awake and needs you. If you’re a couple, it’s a good idea to alternate nights awake so that both of you get the chance to sleep well in between.

Many adults also have problems sleeping, and we estimate that about 15 per cent of them suffer from chronic insomnia.Here are some advice on what you should do as an adult to get good and sufficient sleep:

If you’re going to share a bed with an infant, it’s important that:

See also the brochure Secure sleeping environment for the infant (in Norwegian only), published by the Norwegian SIDS and Stillbirth Society in cooperation with the National Centre for Expertise in Breastfeeding and the Norwegian Directorate of Health.

A newborn baby needs to sleep an average of 13-17 hours per day. They can get tired after being awake one-two hours. If it’s awake too long, the child can get overtired and overstimulated.